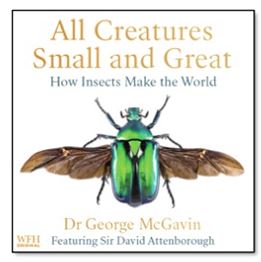 For those who have not come across George McGavin on the radio or on the TV he is a passionate, if not unique spirit of ecology who now works in the media but was once a lecturer at Oxford. We learn a lot about the life of McGavin, an early interest in bugs in Edinburgh from the age of 12 through to his latest tribute to the parlous state of insects worldwide. In some ways I thought this was a promo for The Royal Entomological Society (RES) as it so insect-centric (which I applaud) and one of its nine guest contributors is the president of the RES, Prof. Helen Roy – a ladybird authority. But insects rule the world with their complete mastery of numbers and diversity and put other classes to shame in biodiversity. McGavin says confidently that they will be around on Earth well after our own demise. Therein is the issue that grips McGavin throughout this audiobook. The relentless decline in species, that McGavin reminds us several times that he has experienced in his lifetime. We all have.  You can feel that he feels wounded as an entomologist that his subjects are disappearing, even species that could be useful that will become extinct before they are discovered (a very familiar and true refrain) with steady on-going rainforest loss that no one seems to be able to stop. He does not refrain from speaking the truth, whether it is rainforest loss just to grow new crops (oil palms, soya), burning peat for shooting, cutting verges or ‘unnecessary street lights’.  One of his most animated interviews is with the inimitable fly-centric Dr Eric McAlister particularly on the fruit-fly – 60% of whose 15.000 decoded genes are found in humans (a common ancestry) which cause cancer, offering hope for remedies for various diseases. He calls the fruit-fly ‘arguably the most important insect in the world’ – vying with the house fly as the most dangerous.  Like many TV reporters he asks many questions such as why and how we got into this mess, where have all the insects gone, and so what if they go extinct? But he does give answers. He talks to Sir David Attenborough to see if he has any answers to which he is told that he receives 50-70 letters a day, mostly, now from concerned youngsters. Attenborough’s solution is to i) individually do not waste food, space, fuel, paper etc, ii) that those who have an elected voice should appreciate the international point of view of the worldwide dilemma and do something, and iii) that that there is a need to get politicians to set out remedial measures.  Maybe we have all got it wrong, McGavin invokes Genesis 9.7 ‘be fruitful and multiply’. Yes, says McGavin we have done that, and spoilt the world. We have become complacent and here McGavin says that we have all fallen into the ‘Shifting Benchmark Syndrome’ where the gradual decline of species (example Passenger Pigeon) is easily missed and extinction occurs. He laments his windscreens not being encrusted with a pâté of insects, something we have all noted, and now wonder where they all went.  40% of all insects are now threatened with extinction towards an Eco-Armageddon. There have been mass extinctions before, 250yrs ago at the end of the Permian ‘The Great Dying’ but that was because of acidification of the oceans and gross volcanic activity. Insects at that time did not become widely extinct. Now we are told we are ‘in the middle of a mass extinction event’ the Anthropocene, during this The Age of the Human.  With difficulty we must triage what to save, which insect species we need to save.  We are told by Prof. Philip Stevenson (Kew Gardens) that two out of five plants are now currently at risk of extinction. There is discussion on over-production of food, that an area the size of China produces food that is wasted each year, and that the energy and greenhouse gases to produce it could be saved.  There are moments in the audiobook that McGavin reverts to describing in detail the autecology of various species, such as the honeybee (excellent account), the cochineal beetle, the stag beetle, the galls of oak trees or the Colorado Beetle – all a background for a younger audience, and harking back to this lecturing days.  He gets very annoyed at the phrase Save the Planet when the planet is actually fine, it has looked after itself OK for the last 4.5 billion years and insects in general are always OK. As a good storyteller, McGavin tells us of his adventures mothing in Papua New Guinea where he is ‘ecstatic’ by the diversity of moths to his moth trap, or under the clear skies of Africa. McGavin gets us up to date with neonicinoids in the environment and their potential effects on honeybees. A lot of what he says is backed up with reference to recent research. He quotes E.O. Wilson (we all do) and John Muir; he talks about ‘bee vomit’ (honey) from honeybees and the ‘insect spittle’ (silk) from the silkmoth now extinct in the wild. These descriptions are very appealing to youngsters, and to this end the book is pitched for a very general audience from children right up to all adults interested in the natural environment and what is happening to it, even ecologists, entomologists and naturalists.  There is a very good section on ‘A Natural Pharmacy’ (the audiobook is full of named sections) where the plant world is shown to be a natural pharmacy of useful ‘secondary plant substances’ or scientifically as Prof Philip Stevenson says are ‘Secondary Metabolites’. This is an area much to my own interest especially with the suite of carotenoids and their overlooked importance in inverts and humans.  Much discussion is had on caffeine which in concentration is antagonistic or a deterrent to honeybees (for instance) but in dilution appears to be a stimulant to improve the bee’s carrying out its pollination duties.

There is measured frustration in McGavin’ s voice that the message of the insect decline is not being heard or heeded, as we have all been banging on about this for decades. There have been other voices before about the loss of habitat, such as Marion Shoard, Norman Moore, Graham Harvey, and more recently Elizabeth Kolbert on the 6th extinction and Dave Goulson (with his Silent Earth), but McGavin’s is more a more direct and approachable, well-rounded interpretation, as always backed up with scientific evidence, even though the truth is not heeded.  This topic needed to be aired as an audiotape (14 hours), even if it’s dark message that can be listened-to during a long car journey through a clean windscreen. It has great educational value and should be required ‘reading’ for all schools.