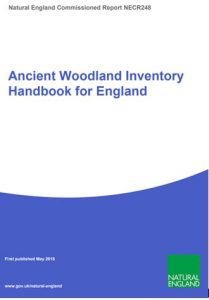 The original Ancient Woodland Inventory (AW1) was originally published provisionally in 1992 following research dating back to 1981.  This current handbook is a working document which is collating evidenced-based information as it becomes available. Much of the research for this has come from the High Weald AONB Unit in East Sussex, the Sussex Biodiversity Record Centre and Natural England.  It is not surprising that a lot of the evidence has come from the heavily wooded parts of Southern England which plays host to some of the best ancient woodland in England.  Data has also been incorporated from work in Herefordshire and in Dorset and work from the Sheffield Hallam University.

The process of updating the AW1 is in four phases i) capturing boundaries via GIS, ii) cross-referencing with existing data sets of woodland, iii) evidence gathering, and iv) evaluating and recording each polygon. There is much more clarification regarding Biodiversity Action Plan (BAP) ‘wood-pasture and parkland’ which they admit had often been left off maps because of ‘their low tree density’. This is a very technical handbook.

Originally wood-pasture was ‘generally omitted’ from the original AWI and ‘understanding of this habitat type is still developing…’(para 3.3.3.3.). However, this update states that ‘Where ancient wood-pastures are identified they should receive the same consideration as other forms of ancient woodland’ (p.9). This document states that it was the Joint Nature Conservation Committee (JNCC) which declared that ‘wood-pasture and parkland’ was indeed a UK Priority Habitat where it had the characteristics of veteran trees, often as scattered individuals, and a wide range of other tree and shrub species.

Two months before this Handbook was published Natural England published its guidance in March 2018 on Ancient Woodland, ancient trees and veteran trees: protecting them from development ( an update from its 2014 edition) where it specifically states that ‘other distinct forms of ancient woodland are: wood pastures identified as ancient.

Other NE documents describe the other characteristics of wood-pasture as being pollarded trees, a matrix of grassland, many saproxylic invertebrates, and supporting 41% of priority species associated with woodland (as per Natural England’s 2015 (EIN011) Summary of evidence: wood-pasture and parkland).

Overall, this is a useful update on the understanding and interpretation of wood pasture as a continuum habitat with ancient woodland.