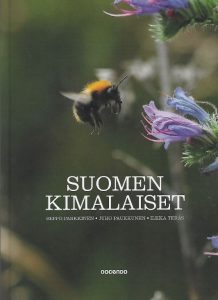 This delightful hardback book on Finnish bumblebees is somewhat of a challenge to English readers, and to this reviewer, as it is all in Finnish but the 150+ colour photographs give away the subject matter being discussed. It is a serious scientific work on the 37 species of bumblebee in Finland with details on all species.

Each species is photographed with 1-4 images of the insect on a flower alongside a photograph of the sort of habitat in which it is found, and descriptions of the species. Size of queens and workers are given. A map showing distribution is useful and it highlights where species distribution is unclear, or in some species that occur through most of Finland but with absence in the far north which is Lapland.  Nine species fall into this category, and British readers will be familiar with B. distinguendus, hortorum, pascuorum, hypnorum, jonellus, bohemicus and sylvestris. Of the cuckoo bumblebees (loiskimalaiset) there are eight species in Finland the most widespread B. bohemicus the most restricted being B. barbutellus.

There are only four species that are found throughout Finland (including Lapland), B. hypnorum, pratorum, jonellus and cryptarum. The least distributed and rarest are B. consobrinus, hyperboreus, barbutellus, and there are two species that have not been seen for a few decades: B. patagiatus and wurflenii. The Buff-tailed Bumblebee, B. terrestris is familiar to British naturalists but it is only in the south of Finland as with B. subterraneus, humilis, sylvarum, campestris and magnus – the latter being unknown in Britain & Ireland which has 22 known species.

Bombus lappinicus, monticola, alpinus, pyrrhopygus, balteatus, and hyperboreus are only found in Lapland, several only amongst the often bleak and rocky landscape of the north. The whole of Finland is actually covered with rocks and lakes with meadows in between, and there has been clearly much scope for bumblebee evolution

since the last ice age. One can get a feel of Finland through the habitats that bumblebees frequent (as shown in the book). The book has a good introduction to these insects, their pests, parasites and look-alikes, their food and their habitats; and the book is complete with references and an index; it also remembers bumblebee experts William Nylander, Kasvitieteilijä Olavi Hulkkosen, Metsänhoitaja Rabbe Elfving and Dosanti Antii Pekkarinen.

What will assist field ecologists are the comprehensive colour keys for identification of all the bumblebee species which runs to 18pp and is full of the familiar colour-banded bodies of males and females together with line drawings and coloured artwork showing fine details. However the book is not easily popped into a pocket.  One can only marvel at the colour diversity that has evolved in bumblebees in the yellows, red-orange, browns and of course black and white. This book has succeeded in cataloguing bumblebee diversity and will stand as the definitive tome of the group for a long while.