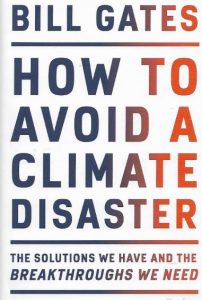 The author, if you didn’t know is a ‘technologist, business leader and philanthropist’ as he describes himself. He is also co-founder of Microsoft. The author is more well known in the world of computers, than his books, previous titles being ‘The Road Ahead’ and ‘Business @ the Speed of Thought’, both with co-authors. But this is now his own book written through Covid 19 and as up to date as one could expect. With Climate Change he says we should remember just two things,51 billion and zero – 51 billion tons being the amount of carbon we add to the atmosphere each year, and zero is what we should aim for.  The chapters have simple titles such as How we plug in, How we make things, How we grow things and How we keep cool and Stay warm. In a sense it is really a simple book with everything set out in a basic formula. It is best not to cherry-pick chapters to read, as it really is meant to be read from the beginning, and his ‘Green Premium’ is a thread that runs through the book. Once you understand the Green Premium you can then cherry-pick, and have a fascinating read. The Green Premium is the difference between for instance fossil fuel prices and the higher priced advanced biofuel prices. That is the extra you have to pay for ‘greener’ products.  For each chapter there is this simple formula: how we got there, why these materials are so problematic for the climate: then the Green Premium is calculated to reducing emissions, how emissions are driven down to make the various materials (steel, electricity, or electric vehicles (EVs) without producing carbon.

Here is a man who has spoken to all the experts and listened to all their advice and is written from a unique perspective. He is also fortunate to be rich enough to pursue his engineering passions through his Bill and Melinda Gates Foundation.  Gates has a fascination with engineering. He particularly likes cement, and waxes lyrical about the longest floating bridge in the world in Seattle, being made of cement with hollows. It seems he investigates everything. We learn that he likes to visit power plants for fun. He repeatedly pours money into new start-ups on the basis that they might perform and do good in the world, often loosing millions. During this Covid 19 pandemic he, via the Melinda and the Gates Foundation committed more than $445 million in grants to fighting the disease, and ‘hundreds of millions more’ to get vaccines.  He has also put $1billion into approaches to offset emissions to zero, all part of his plan to reduce his own personal footprint. He acknowledges that he has big houses and jets around the world, and his foundation was singled out by The Guardian for his effect on the world, and he has more than offset these shortcomings.  In 2015 he encouraged 24 heads of state who formed ‘Mission Innovation’ which now funds $4.6 million annually on clean energy research.

Gates comes out is with simple sentences that sum up world figures, such as on Offshore Wind, that it it is only 0.4% of the world’s energy output in 2019, and that it is only 1/32,000th  of the contribution to America electricity. And on storage batteries, he comes up with a hypothetical scenario if Toyko’s electricity fails from an extreme weather event, how many batteries would be needed to keep the lights on for three days – 14 million, or that is more than the world’s storage capacity in a decade. So we have not got there yet with batteries. There is a lot on solar power, that the cost of panels came down 10 times between 2010 and 2020. The existing old grid is often the problem to moving electricity, for instance to achieve California goal of 60% renewable by 2030, and New York’s goal of 70% green energy cannot do it without enhancing the grid. He loves his calculations and puzzles. Which is the cheapest in the US, a gallon of milk, a gallon of orange-juice or a gallon of gasoline?

The book has a 1950s feel to it, with well read pages and soft and slightly coloured paper – it feels like it should come with the pleasant smell of an old and familiar book – but it is a FSC of paper mix from ‘responsible sources’. There is an index and references to sources for each chapter (and eight blank pages at the back, surely not for notes?). There are quite a few graphs and pie charts and a few black and white photographs, but not overpowered with too many images, and no colour photographs (which it does not need).

Strangely, the book is a cross between a basic textbook on climate change and a ‘Which? guide to which EV car to buy, or boiler, or which energy source to buy, air source or ground source, with a New Scientist article thrown in. The basic worldwide facts are presented from one of the best informed person on the planet. The book is very  US-Centric throughout especially in figures (but bracketed-up with European equivalents by editors) but that is not a detraction; it is of interest how this philanthropist ticks. The book is very readable and is highly recommended for youngsters aged 12 up to adults.