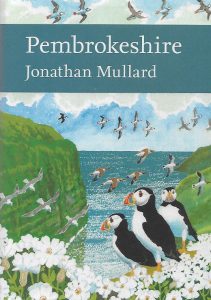 The author has already provided ‘Gower’ and ‘Brecon Beacons’ in the same series, so this is a Welsh hatrick, and at 510 pages it is a beefy tome, well worth the read. Jonathan Mullard has spent most of his life working in local planning and has been instrumental in managing National Parks, AONBs and Heritage Coasts. The extent of the Pembrokshire Coast National Park is impressive, as shown on the only map in the book, as it embraces nearly all of the coastal area of the county: its symbol is the razorbill of which there are 8,000 birds in the county.  The book has interesting chapters on its rich geology, caves and archaeology and a good section on the early naturalists. The natural history of the islands is described in detail: for Caldey, Skokholm, Skomer, Grassholm and Ramsey. Skomer being the best place in Pembrokeshire for puffins (25,227 in 2018) and has its own Skomer vole. Ramsey is famous for the black rabbits put there probably by the Earl of Pembroke. Skokholm is famous for its genetically different mice with their failed fused vertebral columns so studied by the late Prof. Sam Berry from Kent (see his books in the NNS (No 109 ‘Islands’ and No 61 ‘Inheritance and Natural History’) and for the largest slow worms in Britain – so much for evolution and natural selection on islands of which Pembrokeshire excels with examples. Manx shearwaters breed on the islands (450,000 pairs) but decreasing numbers of Storm Petrels (5,000 birds) are now recorded. The shearwaters have a 22,000 mile round journey each year to South America. It was interesting to learn that some seabird colonies can destroy their own breeding grounds, in the case of the original ‘immense puffin colony’ on Grassholm it is thought that they undermined so much of the peat layer with their nest tunneling that their numbers declined; the habitat has now been replaced by a large gannetry.   The rugged rocks and castle ruins have been the subject of studies on the rich lichen species, including the cuckoo stones in churchyards. For a region that is steeped in humidity the damp-loving ferns and bryophtyes have been clearly described, as well as the natural history of meres. There is the very rare ‘Pembroke dwarf moth’ to look out for, only re-found recently on the Castlemartin MOD Range: there are only five known sites in the UK. The effects of other industry are covered in this book with the exploitation of the Milford Haven, but the outstanding natural history gems of the rugged Pembroke coast, terrestrial and underwater, have all been thoroughly explored in this book. In keeping with the NNS the book is populated with many colour photographs, many by the author and there is the usual  extensive references and index. For the craggy interior of Pembrokeshire, which is always interesting because you never know what is around the next crag, this is an essential book to have back at base (for it is too big and heavy to go in the rucksack). It is a superb book, well researched, and a delight for all those who have ventured on field trips, or wished they had, since it brings to life the particularly rich tapestry of wildlife that this part of Wales now protects.