Three ladybird books & and a Ladybird App. – all coloured red! Two of the books are by different Helens. 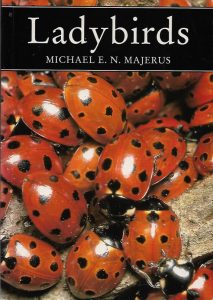 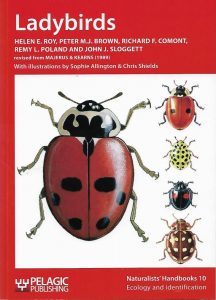 ‘European Ladybirds App’ v.   2021. v1.1.1(1) The app was hand crafted by Karolis Kazlauskis, and authored by a team of 14 scientists from UK, ITA, CZ, SK, BE and PT with financial support from the Centre for Ecology & Hydrology (CEH) and Anglia Ruskin University (Faculty of Science & Engineering). Two of the authors, Roy and Brown are co-authors of one of the books above. It is free, simple and quick to download and is conceptionally easy to use. Thirty nine species and forms of ladybird are illustrated with common and latin names. A digest on each species describes size, legs, colours, spots, plants on which it is likely to be found and and food, and habitats. After an initial registration with name and address the app knows where you are an applies a 6-figure OS map reference, and all that is required is to note which species found, in what sort of habitat (a choice is given) hit send record, adding a photo if you wish. This is a user-friendly app which you can carry on your android for field identification and reporting records.

There are other ways to record ladybirds, for instance in the long running UK Ladybird Survey via www.coleoptera.org.uk/coccinellidae) or via the iRecord app.

The classic and highly collectable book on Ladybirds by the late Michael E.N. Majerus stated in 1994 that there were 42 species in Britain. It remains the best original book on ladybirds. The figure is now updated by Helen Boyce’s book who states that there are now 47 species of ladybird in Britain and Ireland, but only 26 of them, now including the Harlequin are conspicuous – thus setting the scene for her book.

The Helen Boyce book is a short but succinct book of colour photographs and explanations in double-space text for identification; the Helen Roy et al book is much longer and more of a digest and thorough scientific treatment of ladybirds with chapters on ladybirds in the environment, their enemies, variation, population and evolutional biology and identification with keys to adult British ladybirds, all adult British Coccinellidae and larvae of British ladybirds. The field and lab techniques are particularly useful. The Helen Roy book is a fair substitute, and up to date too, for the Majerus book which might be difficult to find cheaply. It is all that beginners would need to get started on ladybird identification, a good concise book.

If you have difficulty identifying a Harlequins from other Coccinellids there is a 32 pages of subtle chararacteristics in the Harlequin book, such as i) only Harlequins have two ‘shoulder spots’, ii) they never have ‘Angel Wings’, iii) they are 5-8mm long, iv) ‘the only black ladybird that has full, round white ‘cheeks’ is the harlequin v) harlequins do not have white spots on their wing cases vi) they have ‘pinched’ dimples on the rear of the abdomens and viii) they have a lip on the elytra.  There is also a photographic guide on how to distinquish harlequin larvae from other ladybirds, and the most interesting one are the branched spines known as scoli. There are references and index in both of the more recent books.

All readers have a an affinity with ladybirds, and after befriending an individual the question is often which species is it. Both books will help at this stage, though in the field the app is invaluable and the best choice, even though both books will fit into a jacket pocket.  The classification of ladybirds according to the number of spots is deceivingly simple, but as with many things in nature the more you look the more alternatives come forward.

All these books are useful.  In a world before Harlequins (introduced into the UK in 2003 and spread to many areas at 100km a year) and in a world that Dr Majerus did not know about, the widespread occurrence of Harlequins introduced another level of variation amongst ladybirds, If you thought that the range of variation amongst ladybirds was great, then Harlequins are at another level. Thus the need for a book on Harlequins and how to distinguish them. This aim has been discharged well.

Do the books have an answer to this intriguing colour variation?  Helen Roy et al say that ‘factors producing these variations are unknown in many species’. There is much discussion about genetic effects, but the environment has something to do with it too. It is ‘expected that ladybirds will be negatively affected by climate change’ and it was interesting to learn about the dark melanic forms of ladybirds, especially that ‘darker forms are associated with cooler humid climates’.

2-spot and 10-spot and the Harlequin are the most variable of ladybirds, and some reliance is had in the Helen Roy book of the old classification of the German entomologist who listed 119 colour forms in his research in 1926-37. By 1945 more than 200 colour forms of the Harlequin ladybird had been listed for Europe with only three in the Britain.

The colour red has been evolved especially for aposematic purposes by these ladybirds, and also in combination with black and white, and yellow. It is as if ladybirds have cornered the red market for defence in a lively world of predators, but it is not the case. Many other insects use red for great effect. 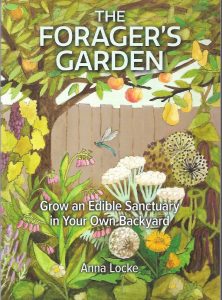 The author has a herbal medicine degree and is an expert on permaculture and has produced a fine example of an easily accessible book for beginners to grow food. The book is not about foraging about along waysides and woodlands to bring back bunches of edible plants a la Richard Mabey’s ‘Food For Free’. It is more about a wake up call to bring useful plants into the garden and let them perform, or run riot; or let them arise and colonise the garden, in a form of rewilding. Rewilding is one of three principles of permaculture and there is a small section in this book but that subject is covered elsewhere in Isabella Tree’s book on ‘Wilding’ as a different kind of feeding off the land. However, amongst the many colour photographs, and black and white artworks, there are plenty of ‘wild’ looking parts of the garden up against walls, gravelly edges, which is just what Anna proposes, willowherbs, foxgloves, apples, pears and plenty of  ground cover, no neat lawns here.  There are 15 chapters which range from wildflowers, trees, and managing the wild garden, composting, pruning and being at ease with the space; and lists and tables to consider on species selection. There are also plenty of plans for layout in small places, but the ideas can go large to fit most spaces and enthusiasms. The author’s experience of a garden designer in London brings a lot of professionism to the book, and common sense for which beginners will be grateful. There are some neat tricks for water collection and distribution for off-grid gardens, reminding me of ideas that might be found in the alternative energy site in Wales, or in drought years, or in the Mediterranean (Anna has inspiration from Sicily).  Anna Locke practices in Hastings and manages the Ore in Bloom society. There are references to local places such as the Hornsburst Wood Forest Garden and the Bohemia Walled Garden Association which show, with before and after images, how gardens can be turned round to being useful for food production. But the wild turnaround can be applied anywhere. The book is for the UK and US market and the species chosen and all the ideas are applicable both sides of the Atlantic.  I like Anna’s enthusiasm for plant guilds that naturalists would also call suites of species, or just an example of rich biodiversity where in nature everything grows together. Bringing associated species together in gardens (for instance with plug plants), or just encouraging them to find their place and spread naturally, is presumably an aim for any wild garden, except here there is a preference for food. There is no need to eat the foxgloves (steady on there – danger!) but daisies, bugle and sorrel are recommended as food.  Clearly Anna likes nature, and her acknowledgement ‘To the field that held me’ reminds me of Robert Louis Stevenson who so liked the woodlands on his camping trek through the Cevennes mountains, that in the morning he laid coins on tree stumps as a thank you for such a nice environment. I too, know that feeling. Give me a wood or meadow any day.  For those beginners who get inspired by this book, they can save themselves a lot of money by foraging in their own back yard. This book also ticks the principle boxes for ‘regenerative agriculture’ and ‘community resilience’.  If you have a very large back yard you could at least have some wild boar to do some of the hard digging for you. The book is recommended for all those would would like to live the foraging life and commune with nature.