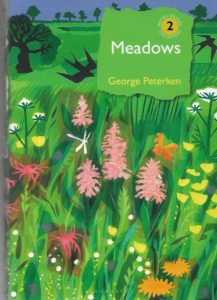 There are now 11 volumes in Bloomsbury’s Wildlife Collection and a fine series it is. This is an early one written by an authority on woodlands and flowers. Peterken worked originally for the Nature Conservancy (NC), and then he was part of the Chief Scientist’s team at the Nature Conservancy Council (NCC) that became English Nature (EN) and now Natural England (NE) – a fine pedigree to discuss the importance of meadows. This is a very pleasing and satisfactory book that is particularly comprehensive at well over 400 pages.  It feels like the author was given a free hand to include everything about meadows.  He starts out to define what exactly is a meadow and how other authors, including myself (Meadows, 1992) have included all possible interpretations of meadows.  Peterken states that meadows are technically ‘grasslands that are mown for hay, ‘which means they must be ‘shut-up’ in spring and allowed to grow without grazing until they are cut in summer’. Peterken tends to err on the importance of ‘grasslands’ in his interpretation of meadows, as this is where meadows tend to fall in the strict and official classification of British plant communities. However, there is no official classification directly for meadows per se.  The National Vegetation Classification (NVC) has acronyms for each type of grassland, and as Peterken says ‘the majority of meadows fall within MG5..’ but there is so much variation depending on the soil chemistry – limestone, clay etc.  Field botanists and ecologists will know what this means, and the names of the applicable wildflower species that designate each classification, but members of the general public will not. There is no glossary. There are over 50 references to NVC categories like MG5, but this reflects the serious side of grassland classification espoused by John Rodwell in his series of volumes, which Peterken follows. Meadows actually occur across several volumes as ‘meadows’ are actually only a description, or descriptive turn of phrase, about a collection of species describing one sort of habitat that we all subjectively like. Peterken could get bogged down in the minutiae of particular acronyms but he does not. There is however less room for the popular side of meadow creation in this book, which is now practiced widely privately and in public places. So, it was no surprise that the work of Dame Miriam Rothschild and her infectious enthusiasm and her influence on The Prince of Wales and his meadows is not mentioned.  Also the inspirational work of wildflower seed purveyor Donald MacIntyre and Emorsgate Seeds which has coloured many a motorway embankment and municipal parks across the country for all to see, for the last few decades is not mentioned.

There are 15 chapters whose titles range from the meadow flora, classification, origins, making hay, diversity , ‘birds, bees, butterflies and other fauna’, ‘loss and survival’ and ‘looking forward.

The author comes out with the classic quote of 97% decline of meadows in England and Welsh lowlands up to the 1980s following the published work of Fuller in 1987. So this book celebrates meadows of which only 3% are left. He describes how they are so precious that many SSSIs have been created round them, and how increasing habitat destruction and  ‘improvement’ has led to their continued demise.  Thus, for the last few decades one has been dabbling in the conservation of just the 3% of remaining meadows and wondering how beautiful the countryside used to be. One also wonders if the 3% has been diminishing. No-one seems to be quantitatively charting any further demise. However Peterken does mention new agro-schemes for meadow enhancements across the countryside as well as many effective community initiatives, so all is not lost, and the quantum has remained the same, perhaps, or gone up? Re-wilding is mentioned around the scientific debate about what Neolithic meadows might have been like and the theories of Frans Vera (2000), but there is otherwise no mention of the present enthusiasm of re-wilding / wilding, and the often-mentioned Knepp Estate (West Sussex), where meadows are always part of any ecological or enhancement mosaic.

The book is not entirely UK-centric, for the chapter on European meadows brings in discussion of meadows from Estonia, the species-rich alpine rich meadows of Ecrins National Park in France,  Switzerland, Moldovia, and Transylvania in Romania. We learn more about colourful wood-meadows, wet-meadows and litter-meadows, the variety of hay ricks, hay cocks and different ways of scything. Continental meadows are often extremely rich, arresting and beyond anything seen in Britain, but Peterken is sceptical….’that, contrary to the myth, not all Continental meadows are wonderfully floriferous.’ … ‘many are generally only grass-rich, with limited colour’. Some may disagree.

One of the chapters in the book is about ‘Translocating meadows to the colonies’ and here Peterken describes the familiarity of visiting New Zealand with the British introduced grasses, wildflowers and bumblebees, or the progress of early settlers in east and west North America with their meadow endeavours. He deals with butterflies in meadows well, where he charts each species according to the various classification of meadow types. I am sure the butterflies appreciate being put into tidy boxes, but at the same time it does reflect their very important and pernickety food preferences reflecting their essential ecology.   Nearly all the well-known named meadows are mentioned, such as Cricklade, Lugg and Oxford meadows, and the range of colourful wildflower meadow plants that we all love and associate with meadows are in the book, even Lady’s Slipper orchid that few see in Britain. The book has a wealth of fine photographs of meadows and details of certain species of botanical associations. I like the old black and white photos of male-dominated hay-making teams, and the mixed teams, and of course pictures of haystacks always remind us that 97% of meadows are now gone. There are References and indexes to wildflower species and subjects – overall a fine treatise and unlikely to be surpassed.