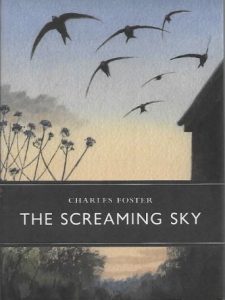 The author is an academic philosopher at the University of Oxford who has won all sorts of prizes for his other works. However, he admits this is not a scientific book at all and that he has written this book about swifts simply because he is obsessive about them. The book is entirely about swifts, Apus apus, and the author fits all his obsessive notes and observations into a dozen chapters in the year of the swift from January to December. I am not sure the author has enough to say in some months, as there is not always a lot of factual information to say, but he has his anecdotes in any way. The book reminds me of ‘A single Swallow’ by Horatio Clare (Vintage, 2010) both charting the movements of regular migrants, with lots of information gaps along the way. The book cover and the plates within are all by the finest swift illustrator Jonathan Pomroy whose annotated pencil sketches of the birds in flight, in the nest and in screaming parties are well presented and are a great addition; the drawings are so life-like and dynamic. There are so many unknowns about a migrants, and the author has travelled to Spain, South Africa and Asia to see what is going on, to puzzle over spring and autumn passages, often successfully. He obsesses over facts and figures, that the birds fly 6,000 miles each way twice a year to South Africa, and that they live up to 21 years, so that is about 770,910 miles in a lifetime which includes the general flying around that they do ordinarily. The newly-born nestling is 2.75g and it will increase its weight 24 times by its fourth week. It has to grow fast as in England the swifts start to return south in earnest. You would have to be lucky to see a movement of 46,000 swifts off Gibraltar Point in June. It is a short, popular book of 179 pages and it belongs to a series of similarly short texts with about 40 titles. There are references to books from which he has drawn information and a list of books and useful websites. A short index would have been useful to remind the reader of salient pieces, or a table of facts and figures would have been useful too. I would like to have seen a little bit more about the ecology (all about ‘flyburgers’ that adults bring back to the nest) but then the species spends most of its life in the rarified atmosphere at 3,000 to 6,000 feet and it still keeps its secrets.