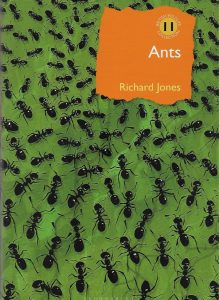 It is always good to see a new book on ants, and Richard Jones has done justice to these very successful animals. Jones is a highly respected professional entomologist with one of the keenest eyes for the mega-diversity of British invertebrates. He has written quite a number of natural history books including Beetles (No. 136 in the New Naturalist series, 2018), and Call of Nature (Pelagic, 2017), both also reviewed here,[1] both remarkable books.  A south London man, Jones was brought up with his father an ‘amateur but expert botanist and entomologist’ and spent much of his youth exploring in East Sussex.

As the book flyleaf says, this covers all ant species in the British Isles and those in nearby mainland Europe. This amounts to ‘about 50 species of ant that might be regarded as genuinely British or Irish’, and there are three other species from the Channel Islands.   Jones allows himself to get diverted into talking about non-British ants, as he says he makes ‘detours and diversions across the globe’ where there are about 12,500 ant species. Plenty to choose from. But I like the detours very much. It becomes a more rounded book, particularly as it speaks to my own ant encounters around the world.

In the book I am then face-to-face with bullet ants (great photo) which I have encountered frequently in the Amazon, and of the floating islands of ants going downstream during annual periods of high water in the River Negro – just do not let your canoe touch the floating island as the ants get on board within milliseconds and panic ensues in caiman-infested waters.  And in Sulawesi (Indonesia) there is also the risk of being killed by giant ant galls falling from the canopy. From tip-toeing over the lawns of South Carolina with fire ants, or crashing through South American rainforest with ants issuing from acacia galls at the slightest touch – these are all covered, some illustrated. These small animals come with a big punch – always punching above their weight.

The book has ten chapters starting with what is an ant, their evolution, interactions between ant species and interactions with human, how they fit in with the landscape, and how to study ants.. The chapter on the ants of Britain and Ireland is set out in sections, species by species in a systematic manner, giving latin names and english names where known.  The intimate association of ants with blue butterfly metamorphosis is covered. Jones is justly very resistent to using common names (and only with lower case names not to embolden them with importance), which is what every entomologist will tell you, and in most cases ants mostly only have latin names. You will have to read older texts to find out about horse ants, honey ants or pastural ants. There are photographs to some of the species (would have been nice to have many more), but this is not an identification book. It is just an absorbing book on ants.

Ants have always been interesting to naturalists, and it is not surprising that there have been a lot of books about them since the early 19th century. I am reminded of other ‘ant books’ such as Sir John Lubbock’s Ants, Bees, and Wasps. (1885 London, Kegan Paul, Trench) who, even then referenced over 50 books and memoires on ants – Sir John lived in Kent – and Maurice Maeterlinck’s ‘The Life of the Ant (1930 translated by Bernard Miall), as well as the more recent Brian’s Ants in the New Naturalist’s Library (1977, Collins). Not all of these are cited. Perhaps that is a good thing, as it brings a new and refreshing look at ants.

This is a lockdown book, written during 2020 and 2021, and is not the worst for it. Even the home-made ‘pancake ants’ have some tasty educational value. The illustrations throughout the book are good (they are for this series of books) and much use has been made of black and white plates from older texts.  If people are keen on identifying ants there is indeed a proper key at the end of the book.

The References are comprehensive, including 12 citations to Jones’s work. I was at Royal Holloway College when ant expert Dr John Pontin was a lecturer and Jones mentions his work throughout, and cites two references.  John unfortunately died in 2021; he wrote The Ants of Surrey (Surrey Wildlife, 2005) and fought to save the rarest of Britain’s ants, F. rufibarbis  – which is mentioned in the book as it was illustrated on a Royal Mail postage stamp.   Ants have come a long way; frankly stamping their mark on British society.  Jones has successfully promoted their importance in a very popular manner.