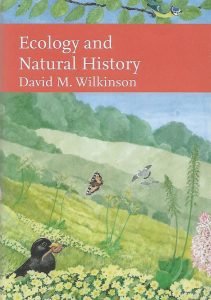 142 titles of this esteemed series of New Naturalists Library (NNL) have never used the word ecology in the title, but it has been fundamental to the discussion of many. The book reminds me of a classic work, Ecology of the English Chalk (C. J. Smith, 1980. Academic Press, 573pp) which is much longer, and which Wilkinson does not mention; there is just one reference to chalk in the index which is surprising.  Prof. Wilkinson approaches his new book from a wide angle of interests in the living world, since he is a Reader in environmental sciences at Liverpool John Moores University, and visiting professor in ecology at University of Lincoln and honorary research fellow in archaeology at the University of Nottingham.  His published works range from bacteria to dinosaurs.  So how does he put together a book on ecology and natural history of the British Isles?  Possibly very selectively.  Indeed, this is the case, the author says that it written very much in the same manner as Prof Sam Berry in his Inheritance and Natural History (No. 61) i.e. as his final year lectures without the mathematics. Wilkinson’s book provides ‘something more accessible, while maintaining scientific rigour.’ First he describes what is ecology, so he starts the bar low. Some of his eleven chapters are on particular places such as Windermere, Peak District, Cairngorms, Wicken Fen, Snowdonia’s Cwm Idwal, Rothamsted and Wytham Woods (two chapters no less), and who would blame him, for some of these are classic sites where lots of students have worked and data for degrees have been gathered and much research material is available. There is also a chapter on Gilbert White’s swifts at Selborne,  Grime’s work on snails, but nothing on Berry’s work on small mammals or Kettlewell’s work on changing moth colours, and nothing on the flora of nunataks. Climate change figures throughout the chapters and discussions, and there are colour photographs of Bass Rock showing variable size of the gannetry.  There is a reproduction of one of Bewick’s prints in the period of the Little Ice Age of someone trudging through the snow. Change is an external factor that even Darwin acknowledged altered the ecology; then and now it still is the climate governing ecological impact. The author engages us with the way that algae and bacteria (one of the author’s favourite subjects) are part of the ecology of habitats, to this has to be considered in context of the botany of arctic-alpine habitats in Wales and Scotland, to the research plots of Wicken, where the ecology is influenced by man, to diminishing meadows. When Wilkinson is talking about invasive plant species I am reminded of Richard Mabey’s Weeds (1996, Profile Books. 324pp) which is a good in-depth read of the subject. As is customary with this NNL series of books, this volume has lots of colour photographs (generally good), references, and a general and species index. This is not a gloom and doom book (just the last chapter on man’s impact), it’s ecology to the core and a good read. It is pity that the word ‘ecology’ took so long to get its name on the front cover the New Naturalists series. At least ‘conservation’ had a head start on ‘ecology’.