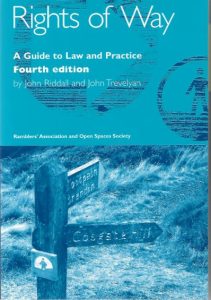 Known as The Blue Book, this has been the bible for ramblers since 1983.

The book was written by two authors, John Riddall, a barrister, and John Trevelyan who worked with the Ramblers’ Association. Trevelyan had previously been heavily involved with the passage through Parliament of the Wildlife and Countryside Bill and he could see that a lot of the existing legislation on rights of way needed substantial revision. That is where The Open Spaces Society came on board as co-publishers with The Ramblers’ Association. That was the genesis of the Blue Book, which sold out in its first edition. The 4th edition of 2007 has not been revised.  Sadly John Riddall died in 2014 aged 86.

The book is a massive and weighty tome, typical of many legal books, and it has all the feel and look of legal books, with the minutiae and arguments of cases referenced galore. The book is in two parts, the first on the law and practice, the second on Acts, Regulations and Circulars, which splits the book almost in half (400 pages each). There are nine pages of legal cases and a list of law reports and 12 pages of chronological legal instruments from 1275 AD which is useful.

Not included in the book are all Welsh regulations or publications ‘where these are equivalent of those in England’. This is a pity as the equivalent Welsh regulations depart significantly from their English equivalents, with completely different on-line resources and ways of conveying information of a natural history nature and access to the countryside. Much has moved on on conservation awareness in Wales in the last few years, since the Blue Book was published.  Ecologists used to accessing English data have to re-learn the Welsh way of accessing the same type of habitats, flora and fauna but shown in a different way.

The collection of laws and guidances all in one place is an excellent idea (i.e. Part II of the book) as its provides an alternative location for the shelves of separate legal acts and laws that one might have.  As the texts have been written by these two authors, both experts in legal matters, the texts are written in a familiar legal way with references to cases throughout, and cited in proper legal fashion. So the book is not for the general public. It is perfect, even at this advanced out-of-date stage, for law students, libraries and those of the general public who wish to dip in and extract a useful statement of case to support a local action.

It is not a book to review from cover to cover, so a dip into the index is a way in. The index could have been more inclusive. There were interesting sections of the book that on searching in the index that could not be re-found. The book is a useful gazzeter to information on all issues which may arise in issues to do with footpaths, bridlepaths, obstruction, barbed wire, signage, dogs etc.  I can see people dipping in to find who has priority on footpaths (cyclists, walkers or horse-riders) or what really counts as an Ancient path (particularly with keenness amongst walkers nationwide to register walkways before 2026).

Although The Blue Book came out in 2013 it just missed mentioning The National Planning Policy Framework (NPPF) which came out in 2012. The NPPF has been an important document in planning and is now in its July 2021 version, and its relevance to rights of way is something that could be addressed in a new edition of The Blue Book.  Even as the 2013 edition says that various matters were already on-line in 2013, there are many more laws on-line now, so perhaps there will be less call for this Blue Book in the future – and it may  go the same way as the text version of Encylopaedia Britannica – most niceties of the legal profession available with the click of a button – perhaps not all the niceties of nuances in case law  for which a real book would still be useful.  The book is good to have as a historical record, seriously and comprehensively up to date to 2013.