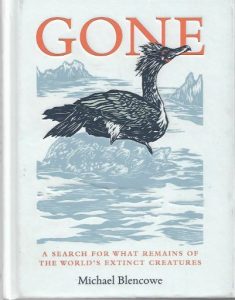 Focusing on just eleven animals, the author provides an interesting narrative on species that have now disappeared, some rather quickly since being discovered ,such is the impact of man.

The author, from the Sussex Wildlife Trust, describes the Booth Museum in Brighton where the tower clock has stopped at three minutes to midnight – a reminder of the overall global decline of nature and the little time to find a fix.

There is another Sussex connection, since the chapter on the dodo is enlivened with the author’s encounter with the world’s expert on dodos who lives in Battle, Ralfe Whistler who has various dodo artefacts.

This selection of doomed animals is just the tip of the 413 species of animals, plants and fungi lost in Great Britain in the last 200 years (quoted on page 176). This does not seem enough loss compared to the overall publicised position. The UK government admits (2021) that 14 out of 42 biodiversity indicators show a long term decline of habitats and species.

Michael has visited many other museums around the world, for instance to see the whole skeleton of the now extinct Stella’s sea cow in the Helsinki (Finland) Natural History Museum. These were huge blubbery mammals weighing several tons, floated on the surface and ate kelp. It took just 27 years between discovery to their butchered extinction.

Blencowe has visited the formidable collections of Lord Rothschild at Tring to see the two specimens of the Spectacled Cormorant, and the Smithsonian Museum, and brings the book right up to date with new discoveries in Japan on recently found bones.

Blencowe has a very discursive style of writing and puts notable events in the text as a reminder of what was happening in the world at the time of more recent extinctions. The book is incredibly well researched with every timeline explored resulting in the ultimate demise of the species. It is a revelation of man’s effect on wildlife.  There is much fascinating detail on expeditions, who ran them, what they doing, and which discoveries were made. The book will appeal to a wide readership, older children and adults, and as a definitive account of these ‘gone’ animals. It is a good book just to pick up and read a single species chapter. Excellent for a train journey.

The book is dedicated to Michael’s long-lived pet tortoise (Tootles) which leads the reader to all about the Pinta Island Tortoise (Galapagos) and the inevitable demise of famous ‘Lonesome George’ on 24 June 2012.

The book includes a world map showing where the selected species lived (Galapagos, California, Iceland, Reunion, Japan, and three in New Zealand, and two in Russia) and the positions of twelve museums (four in southern England, three in New Zealand), to visit. Surely, a bee-line will be needed in Brighton to visit the Booth Museum.

The pages are interspersed with delightful colour prints in various muted colour shades of various greens and browns by Jade Thery,  all nicely displayed on the page. There is a Further Reading section. Altogether the book is a very satisfactory good read and good to have in any natural history library.