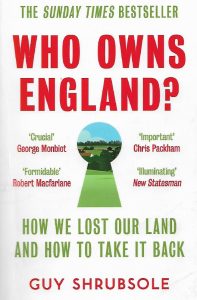 1066 has a lot to do with who owns England today; indeed not a whole lot has changed since then. William the Conquer gave much of his new kingdom to his 200 Norman barons. By the Victorian age 18 million acres of land, or half of England and Wales is still held privately by just 0.01% of the population, this time represented by ‘4,200 Victorian nobles and gentry’. These facts and figures have been meticulously teased out by the author who is an investigative journalist, in conjunction with  colleagues over the last two years. The book deals with the land quantums with sensible chapters on the Crown and the Church, Old Money, New Money, the state, ‘corporate land holdings’ and ‘property owning democracy’. The staggering information is that taxpayers now pay most of these land owners £8m in annual subsidies (figures for 2015), a legacy payment from the desire to reduce the milk lakes’ and ‘butter mountains’ of 2003 crises in Europe from 2003. The figures of land ownership do not add up, since the author believes that about 17% of England’s land is unregistered for various reasons, one of which the Land Registry is still not open to who exactly owns what and where. The Appendices are most interesting and summarise the fruits of these exhaustive investigations. The list of the top 100 land owners is fascinating, so too the list of 24 extant Dukes with their land ownership and the amounts they receive as subsidies. Also of note is the chart on who owns what for all public bodies, the Crown, the Church and Conservation charities; top three are Forestry Commission, the MOD and Highways, with  National Trust, RSPB and Woodland Trust in positions 17-20. The sub-title of the book is summarised with the following ten recommendations comprehensively explored: (listed here:) i) end secrecy, ii) sort the housing crisis, iii) stop subsidies to farmers Iv) restore biodiversity, v) abolish last vestiges of feudalism, vi) reduce tax avoidance, vii) stop the sale of public lands, viii) give people a stake in the country, ix) open up the land to the people, x) introduce a land ethic. This is a well researched book, packed with facts and figures, overflowing with 298 sources of information. There is a small group of colour photographs in the centre of the book, and a good index, though the book is packed with so much data that a comprehensive index would have added far more pages.