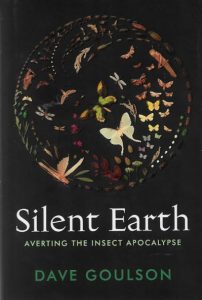 Hot on the heels of other books on the impending disaster to affect the wildlife world we live in, this is another that adds to the debate. It seems that lockdown has had a positive effect on the productivity of all authors. But this assessment of the decline of insects is from an academic for consumption by the general public. And he is good at it, converting scientific facts, arguments and counter-argument into some interesting discussion. The author is Prof.  Dave Goulson, lecturer at the University of Sussex, who, when he is not writing books, looks after freshers giving them a tour of the campus to assess their readiness to understand the living world, identifying the common birds and the bees (which they do very poorly). His lecturing circuit of about 40 lectures a year allow him to assess audiences, and he agrees that talking to primary school schoolchildren is more fulfilling as they pay attention and are enthralled, compared to secondary pupils. He sees a drift of grey hairs in some of the older audiences and they also are more keyed into what is happening. He says that about 90% of the population could not care less about the environment, and he is right, possibly higher. This is however a flaw in his halting the apocalypse. Will they all respond?

There are five sections of the book, Why Insects Matter, Insect Declines, Causes, Where are we headed? and What we can do? in all 21 chapters. Each chapter is quite short and succinct and reads without giving specific references (making the text a better read), but the references are at the back of the book under chapter headings if anyone wants to fact-check Goulson’s comments and threads.  The author draws on his own academic published work, and his travels around the world making observations.  Having just reviewed McGavin’s audio book on insects (All Creatures Small and Great), both authors have used the same published work, whether it is the German experience of declining insects or the Knepp experience of wilding, and drawing on the quoted works of Carson, EO Wilson, Fabre, Monbiot or Attenborough.  It is surprising how there is a relatively small body of work on declining species out there, that everyone quotes. The difference with this book and the others is that Goulson supports all his commentaries with graphs and scientific evidence – almost, but not quite, at the level of a textbook. Most pages are enlightening, and the book can be dipped into to get a different flavour. There are at least ten books I have around me here on the impending Armageddon and the story is the same, the relatively few references the same, Carson being the first key witness.

So where does Goulson really stand. He is an optimist. He says on the flyleaf ‘it is not too late for insect populations to recover’. Attenborough also says that on television. That does not fit comfortably with the 90% who do not care less. Even the sub-title is optimistic ‘averting the insect apocalypse’. Topically he has one chapter on life in the future after the apocalypse several decades on, and another chapter on how to get things right before the apocalypse, education, involvement at local level and getting involved in politics. Goulson also muses on Rumsfeld’s ‘knowns and unknowns’ and ‘unknown knowns’ in the biodiverse insect world. He also has a chapter on ‘Bauble Earth’ about light pollution and effects on wildlife, also very topical at the moment.

Goulson is a bee expert and he often refers to his other books (three out of five on bees and bumblebees) and one has the feeling that one should have read his The Garden Jungle before writing this review as he often refers to it.  His appraisal of the effects of neonics on bees is excellent. Curiously, various vignettes on the peculiarities of a handful of insects are placed at the end of the chapters, not related to the subject matter, but the tiniest peek into the world’s biodiversity that we might loose, such as the earwig with two penises if you have ever seen it in the first place.   With the insect world in Britain of 27K species these are not key to the message of the book, and therefore a distraction, perhaps an entrée into the bizarre world of biodiverse insects for a new book?