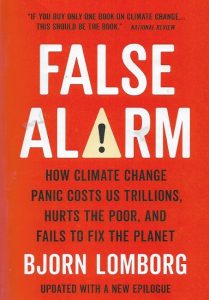 This later edition has a long epilogue which, within the year of publication had to bring it up to date with the fast moving events following COVID-19. Lomborg’s earlier, controversial book The Skeptical Environmentalist, Measuring the Real State of the World (CUP, 2001) went into ten reprints in one year.   Not that everyone likes to reminded of the facts and figures of climate change, but a different interpretation is always welcome. The stats speak for themselves but not everyone really puts them all together like Lomborg.  The author is not a climate change denier, far from it. He is a visiting Prof at Copenhagen Business School, a visiting fellow at Stanford and has been named as one of the 100 ‘Most Influential People of the World’. He knows his stuff and is authoritative with it because he is a statistician at heart; he was an Ass Prof of Statistics at The University of Aarhus in Denmark when he wrote the Skeptical Environmentalist. He deals in published data and incorporates the salient facts and conclusions into his work, so this book is full of supporting graphs and diagrams to illustrate his points – all of which are backed with references to published data.  You have to be committed to read all through his book as it is hugely scientific and not necessarily for the general public who would find it complicated.  The book was being finished off during the Covid epidemic but Lomborg quotes various papers that showed that the decline in the use of cars during lockdown did not have a significant effect on climate change. He states ‘Everything learned over the course of the COVID-19 epidemic has reconfirmed the basic message of this book. Just forcing us to do with less is not the solution, not in the rich world and certainly not for the world’s less well off.’, He is adamant that we need to solve five issues ‘to get our focus back’ which are i) increased carbon tax, ii) green innovation (the most important), iii) adaptation, iv) geoengineering, and v) prosperity.  He holds great store in President Biden’s promise of $75 billion a year for green R&D which could be ‘a real game changer.’  He analyses the truth about the EU’s stated bold commitment to reduce emissions by 55% (from 40%) in 2015. This shows he says ‘good intentions’ but the cost of $1.5-$5 trillion to achieve the actual tiny benefit of ‘postponing global warming by just two weeks’ by the end of the century shows it ‘is a blatantly bad idea.’ There are plenty of topics to investigate by delving into this book for instance on extreme weather events, where Lomborg compares the various extreme events in the US with the GDP, and finds that these events  are ‘causing less suffering in terms of deaths and in terms of GCP’.  With flooding and hurricane events Lomborg discusses the ‘Expanding Bull’s Eye Effect’ where, say an area’s housing expands by 58% over 20 years (actual example) a repeat of a similar flooding example will seem to be significantly greater, when the degree of flooding has perhaps stayed the same. The book is in five sections, The climate of fear, The truth about climate change, How not to fix climate change, How to fix climate change and Tackling Climate Change and All the World’s other challenges.  It is a good but necessarily scientific book with plenty of straight forward arguments informed by published data. Lomborg is a regular Tweeter so you can follow his day to day tweets on how he interprets the living world during the current energy crisis.