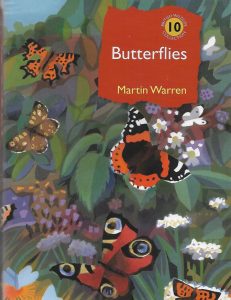 If ever there was an appropriate person to write up this narrative on butterflies it is Dr Martin Warren, formerly Chief Executive of Butterfly Conservation. Originally he worked for The Nature Conservancy Council (NCC) – yes ages ago before it became English Nature and then Natural England – so he has experience that spans government bodies and NGOs and knows a thing or two about management for butterflies.

Warren’s doctorate was on the dainty Wood White butterfly and he has subsequently published on fritillaries (most of the 16 Warren references quoted are either on Wood Whites or fritillaries). He has also published key works on the Heath Fritillary and High Brown Fritillary and I am glad to say the book is not too fritillary-centric, or indeed Wood White-centric, although the book presents a good description of the Cryptic Wood White first observed in 2011 in the Burren, Eire. It is amongst five almost indistinguishable wood white species in Europe which fly together – with more DNA analysis to be carried out on UK specimens to determine their precise identification. Michael Warren is currently Head of Development with Butterfly Conservation Europe, so there is a little dash of continental influence in the text in particular on the effects of climate change and general distribution of populations which is not a bad thing as it informs the wider scene.

The way the book is written is a rolling narrative of butterflies in general, and in particular when necessary, and interspersed with personal observations in the wild. Latin names of plants and animals are banished to the back.  Typically of this book series the text is reminiscent of the Collins New Naturalist Library (NNL), where at the end of each chapter there is a ‘Concluding remarks’ section, which is always useful. NNL include Latin names in the text. Dame Miriam Rothschild gets a mention so too as well as the Chequered Skipper pub. The contributions of other important ‘lep’ authorities are discussed, Jeremy Thomas on the Large Blue and Matthew Oates on the Purple Emperor.

There are eighteen chapters none of which are on individual species, so if you want to know more about Swallowtails, Large blues or Small Tortoiseshells for instance, for which there is a good body of work, then it is a visit to the index to find where they appear, variously, in the text. Seven of the chapters are about the life and metamorphosis of butterflies amounting to about half the book. There are separate chapters on parasitoids, and ‘winners and losers’ and ‘Recording Butterflies’ an enthusiasm enjoyed by many; all very interesting and highlighting changes in butterfly numbers.

But what does Warren say about numbers and reasons of decline? Numbers: Yes, ‘several species have become extinct, and many have declined’….’around a quarter of species have expanded in recent decades due to our warming climate’, and ‘overall three-quarters of species have declined by one or other measure’ – all very confusing evidence over the last 200 years.  Essex Skipper, Brown Argus, Silver-spotted Skipper and Adonis Blue have spread considerably.

The reasons why butterflies are declining are a little more difficult to clarify. The ‘one or other measure’ are nitrogen deposition and pesticides, though Warren says the jury ‘may be out’ on whether neonicotinoid pesticides have impacted on butterfly populations. The biggest culprit for declines appears to be habitat loss and climate change, though Warren is not categorical on this  (whoever can be?) – ‘the evidence suggests’ British butterflies are being pulled in different directions, an environmental tug of war where ‘habitat loss and deterioration far outweighing any benefits from climate change. Warren cites his own work of 2001 to support this tug of war; it is a pity that others have not come down firmly on identifying the reasons for declines. There is so much evidential information on trends and declines, but not enough quantitative evidence on reasons. Warren is just the messenger.

In comparison with other books on butterflies, there has been nothing published recently; one has to go back to E. B. Ford’s ‘Butterflies’ in the NNL series (1945) which was more illustrated in colour and black and white, and certainly more scientific especially on evolution, theoretical genetics and races of butterflies, but equally a good read but on a different level. I have to blow my own trumpet with my ‘The Conservation of Butterflies in Britain’ (1995) which was not illustrated in colour but had some single species chapters.  So overall this new exciting book on butterflies is key to understanding a little more about the vagaries of butterfly populations in a warming world.

With the world changing due to the climate this is mirrored with changes in butterfly distribution. In Warren’s ‘long-distance travellers’ chapter we hear about the longest migrant insects in the world, the Monarch and the Painted Lady. With increase in climate change Red Admiral is now a resident when before it used to be an occasional migrant to these shores. The Monarch aggregations in Mexico are illustrated, though we in Britain are never overwhelmed by stray monarchs, Warren is hopeful that the Map butterfly may colonise this country, following in the footsteps of the Southern Small White and Geranium Bronze both of which have been successful colonisers. The relative dynamics of butterflies is well addressed in the book.

The five appendices i) checklist of butterflies, ii) generations and food plants, iii) habitats and management requirements, iv) parasitoids (hymenopterans – nearly 60 species) and dipterans (18 spp) v) where to see butterflies in Britain and Ireland, are all very useful for keen butterfly-lovers  e.g. Knepp for Purple Emperors where else – but are they are expanding east?

The book is a useful and refreshing account of butterflies that will appeal to everyone; it is colourful and collectable – as a favourite natural history book to display on the table. Butterflies certainly do reflect the state of nature.