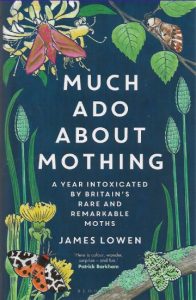 We have already had a butterfly enthusiast run around Britain in a year to shoot all the butterfly species, in the name of Patrick Barkham in his ‘The Butterfly Isles’; he reviews this book on the cover as ‘Here is colour, wonder, surprise – and fun’.  Now we have James Lowen setting himself the target of chasing rare and remarkable moths around the islands, from Cornwall to the Cairngorms. Not that he is chasing all the moths – an impossible task with about 40 times more moths than butterflies.

Lowen was initially inspired to all things moths by a poplar hawk-moth which he had to hand. Most people are enthralled by the beauty and evolution of animals, and essentially this is what this book is about, it celebrates the enthusiasm that one man has for moths. James is completely moth-centric. He exudes moth enthusiasm the way other people pursue particular wildflowers, fungi, bryophytes or even tardigrades.

James is an all-round naturalist, whose grass roots were in Yorkshire which set his seed for the living world, and he has explored South America and the poles; he writes for various papers and has a number of books to his name.  His conversion to moths has been recent and profound, not least encouraged by the enthusiasm of his daughter, Maya who figures in the book, especially in the eight pages of colour photographs in the middle of book which figure 15 species of moth, but which mostly shows venues, equipment and techniques. Oh for more illustrations for a group with 2,500 species.

There are 20 chapters starting with winter-spring and ending in autumn. Although only four chapter headings give a clue about the subjects (Hawk-Moths, Kentish Glory, Clearwings and Blues – read Clifton Nonpareil), the rest are very discursive and story-like, on how a site visit was formulated, with advice from whom, how they got there, what it was like on arrival, the type of habitat and finally the exaltation of finding the target.

The book is well researched and his sorties to various far flung habitats is usually to link up with regional moth experts to explore last known locales and pabula. Local contacts from wildlife groups and from Butterfly Conservation (which also conserves moths) and RSPB (yes moths too) and national projects such as ‘Back from the Brink’ are often the source of his targets.  He has included classic lep stories and research involving Miriam Rothschild and Bernard Kettlewell and waxes lyrical about the new arrival the horse-chestnut micro. Where would he be without his treacle ropes, actinics and other entomological paraphernalia.

His writing is florid and descriptive to an intense or even excessive level; his descriptions of moths are flowery and romantic, whether it is the Old Lady, Scotch burnet, Netted carpet, Crimson underwings, Merveille du Jour or hawk-moths. In his quest to find moths James clocked up 14,000 miles over 258 days and visited 139 locations across 27 counties of equivalent.  A job well done.  But only touching the surface of moth biodiversity.

The book is ideal for general readership. A good read for moth-ers without the scientific clutter. The book will be of interest to naturalists, entomologists and lepidopterists and as a book on moths it is unique and unrivalled. There is an index, a bibliography and list of acknowledgements which runs to four pages. The cover is exciting and colourful. It’s a good book to hand, especially with the colourful and exciting cover.

From the flyleaf blurb it says…’no animal may be better placed to inspire the environmentalists of the future.’  Good luck with that then!  Moths will still continue to have a bad press (as most are brown, hairy and scary to the general public), even though they are more biodiverse than butterflies and in many cases more colourful than butterflies such as the day-fliers which James covers in his travels.  Let’s hope this book has started a revival in their fortunes.