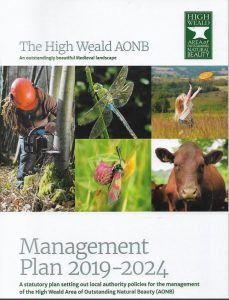 Originally printed in 2004, this is the fourth edition, the others being 2009 and 2014.  What has happened in the meantime is the release of the new NPPF of July 2018 and the concept of Natural Capital, both of which are included. However, the impact on development of Ashdown Forest being both SPA and SAC is not discussed; SPA is not mentioned in the Plan, or Glossary. Otherwise the Plan sets out well the rest of the legal framework (‘conserve and enhance’ seems to have been written into every legal instrument since the year dot), is good on setting the historical scene for the AONB and is good on setting out its own policies for conservation. ‘Natural Beauty’ we are told has not really been expressly defined, but we know that this is a major theme; it’s all in the name, hopefully. The AONB covers 1,461km2 and in the jurisdiction of 15 councils. We are informed that there are 13,401 ponds in the AONB with an estimated 1,600 supporting Great Crested Newts, and 12,500km of hedgerow and field boundaries. About <3% of the AONB land cover is known as wildflower meadows with an estimated <40% field semi-improved grassland that has potential for enhancement.  About 28% of the AONB is ancient woodland representing nearly three times the national average. There are 2,800 parcels of ancient woodland under 2ha and 56km2 of UK BAP ‘wood pasture and parkland’. All these represent a finite resource within the 4th largest of the 46 AONB’s in the UK. The Plan is well illustrated with maps and colour photographs and is available on line too.