We promise to keep your details safe and secure at all times and you can change your mind to opt in or out at any point. We never sell your data to a third party.  GDPR Manager John Feltwell  john@wildlifematters. com   01424 830566 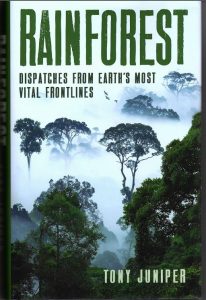 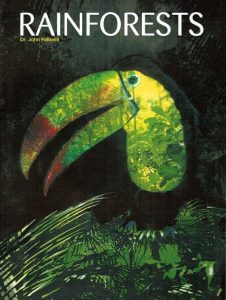 Rainforests are Tony Juniper’s speciality and one of his previous books that I especially liked was ‘Spix’s Macaw’ (2002). He has spent a life working for Friends of the Earth and Greenpeace and is currently with WWF. This book is a summation of his industriousness trying to reduce or slow-down the rate rainforest loss, many times with direct action. Not that he, or anyone else, has been entirely successful in this venture as rainforests are being visibly destroyed (for all to see by satellite), still at an alarming rate since at least the last 30 years; he illustrates the familiar clearance of rainforests to make way for palm oil plantations, or local people living amongst the burnt out stumps of emergent trees. Juniper’s ‘dispatches’ are in fact 22 chapters on different issues affecting tropical rainforests in Asia and Pacific, Africa, Americas;e has not forgotten temperate rainforest globally, including one fragment in South West Wales. There is not too much on Australian rainforests, and he has missed the area off his map on p. 277.  His Chapter 16 is pretty damming in one sentence ‘Indonesia largely erased its rainforests over two decades, aided by the World Bank and the IMF – and multinationals.’ The value of the book is in the endnotes for each chapter that provide corroborative links. There are black and white photographs throughout the book (pity not in full colour) and two sections of stunning colour photographs demonstrating biodiversity by Thomas Marent.  The book is recommended as an excellent source of information on rainforests, as indeed is my own ‘Rainforests’ book (Published by Wildlife Matters in 2009, full colour, 646pp) which is not mentioned!