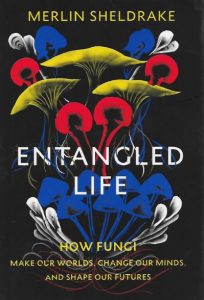 Dr Merlin Sheldrake was awarded his PhD from Cambridge University on fungal networks in the tropical rainforests of Panama, not that South America has a monopoly on fungi, their ramifications are virtually worldwide, and around us all the time, thus the inspiration for the sub-title.  The book is presented in eight chapters with titles such as Living Labyrinths, Mycelial Minds and Wood Wide Webs – the latter concept appeared as early as 1999 and is much talked about today where scientists discuss how perhaps up to 250 trees can all be connected, how trees help each other out and how these networks, links and cascades all work together as a superhighway.

The book is deeply discussive investigating all sorts of theories, such as  ‘Beer before Bread Hypothesis’ that brought man in from the neolithic (the former), or the ‘Drunken Monkey Hypothesis’ which explains man’s fondness to alcohol (from our earliest ancestors’ ability to smell rotting fruit and thus food – and the single mutation 10 million years ago of the enzyme (ADH4) which allows us not to be poisoned by alcohol), or, indeed Schwendener’s Dual Theory to explain the make up of lichens (fungus plus algae – as believed then). Even Beatrix Potter was not impressed with that. In the ‘Intimacy of Strangers’ chapter Sheldrake provides one of the best introduction to lichens I have seen anywhere, and comes out with this statement: ‘A portion of the minerals in your body is likely to have passed through your body at some stage’ – a sobering thought after he has explained about lichens mining the minerals on their substrates and releasing these into the environment. After all lichens go back 400 million years in their fossil history, and that today they encrust ‘8% of the planet’s surface.’ and that the record breaking lichen lives in Swedish Lapland and is over 9000 years old.  It seems that the dual-theory needs to be undated as recent researchers have found there are other ‘partners’ in lichens. After scientists ground up lichens and checked the DNA they found plenty of bacteria  (‘jam-packed full of bacteria’) and yeast. Lichens are thus ‘microbiomes’.

I was particularly taken by Sheldrake’s appreciation of Monotropa fungi, since I had photographed this very rare fungus on a mountain top in the Cévennes (Gard, France). He called it a ‘mycoheterotroph’, as it is a fungus that makes no energy itself and it is entirely dependent other sources; and he compares it to some blue Voyria species in Panama. Such a tongue-twister name is ‘An unlovely name for such characteristic plants’. I agree.  Apparently 10% of plant species share this phenomenon. Although Sheldrake calls fungi plants, he does explore the slippery way that fungi are named, but after all the debate, the concensus is that they untidyly fall into a separate kingdom, if one really must put species into boxes in the first place. 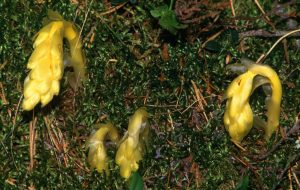 The book has 16pp of colour images in the centre of the book (I would have like many, many more), a bibliography and index. The ‘Notes’ are, in some cases, more interesting in back stories and supporting scientific information, than the text and are arranged by chapter.  The flow of the book is made more readable and enjoyable, and it stands as a very good read from a scientific enthusiast who is intimately enveloped in the world of mystical mycelia. It has a serious scientific edge to the book and it will be of great interest to those who like the fascination of fungi and their latest scientific advances. It is highly recommended, and will become a key work. The pyschodelic cover is a masterpiece.  John Feltwell 7 February 2021.