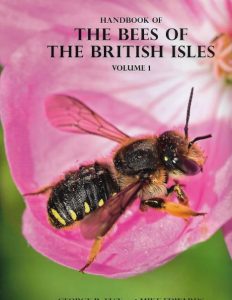 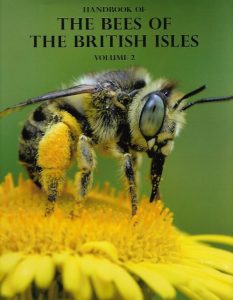 This has to be the bee book of the century. It will not be surpassed for decades. It is written by two experts who have put several decades of dedicated work on these hymenoptera into the book. George Else, who I originally met in the virgin rainforests of Sulawesi in 1985 on Project Wallace, worked at The Natural History Museum in London as curator of bees and certain aculeate wasps, until he retired in 2007. Mike Edwards was originally at Leeds University and helped to set up BWARS (Bees, Wasps and Ants Recording Society), latterly running his own ecological consultancy. The germ of this book was realised by George Else who has a great debt of gratitude for Mike Edwards becoming co-author of these mighty tomes. Many entomologists and hymenopterists are acknowledged for inputting their information, data, diagrams and photographs, and on the latter Paul Brock is mentioned as the ‘all round entomologist…and outstanding insect photographer’ who has supplied many of the photographs. And they are excellent.  The aim of the book was to photograph all bee species in the UK in the wild, which was achieved, save for the two only known from museum specimens: Halictus subauratus and Bombus pomorium. On their count there are 277 species of bee species have been recorded from the British Isles. Of those 171 are known from the Channel Islands, including 11 species that are unknown in the mainland of Britain.   George’s original idea was not to include any photographs which would have been a bad idea. All the photographs are included on a handy CD.  Volume 1 includes information on recognition of bees, how to photograph them, where to find them and identification of pollen loads. After the comprehensive keys to bee genera the book launches into the systematic review of all species, with maps, that flows over into Volume 2. The photographs throughout are excellent for identification purposes but it is not likely that the amateur entomologist or naturalist will ever pay the £137.50 for these wonderful books.  Only serious bee enthusiasts will.