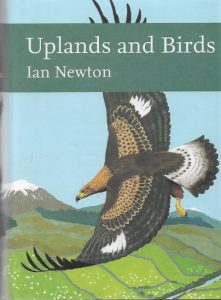 The author is a seasoned NNL writer, having already penned four volumes, Finches (1972), Bird Migration (2010), Bird Populations (2013) and Farmland and Birds (2017), and guess what from those titles, he is ‘an ornithologist and applied scientist, and a leading expert on bird ecology and migration, specialising in finches, waterfowl and birds of prey’ as the flyleaf states. He started work with NERC in 1967. This must be some sort of record for NNL writers. This is a big book only beaten by ‘Farmland and Birds’ (630pp). There are 17 chapters, mostly on birds – the title could have been reduced to ‘Upland Birds’ but the intriguing chapter on ‘Sward-makers’ is all about how deer, sheep and goats have formed the hillsides, and there are chapters on hill-farming of the valleys and uplands (the ‘Lower Fields’, and the ‘Open Hills’) and an excellent chapter on Native Woodlands from the post-glacial period to the present day. Whilst maps show the uplands down the west of Britain, we are told that peat bogs cover one tenth of the land in Britain and that they are increasingly appreciated as carbon stores.

Topically, there are two chapters about grouse on raptors, management and gamekeepers, and another chapter on rewilding. He explains there are now about 300 moors, of which managed grouse moors cover less than one-fifth of the British uplands, mostly in Scotland, but also in England, and now, none in Wales. Management of grouse moors comes down to five actions, 1) rotational patchy sward burning, 2) drainage of damp peat bogs (ceasing), 3) contolling of vertebrate predators of grouse, including ‘foxes, mustelids, corvids and, illegally, also raptors..’ (Newton has written elsewhere extensively on raptors in uplands) 4)  treatment with anthelmintic drugs to reduce infection by the strongyle worm Trichostrongylus tenuis, and 5) treatment of sheep with acaricide. Newton thinks it would be sad to see grouse moors disappear if there is no compromise from both sides; they are are actively working to find a way to manage grouse moors without killing raptors.

Newton prefers to use the term ‘rewilding’ though he says that some splitters like to think of rewilding as ‘an attempt to replicate what might have existed in the Mesolithic’ – if we really knew, and ‘wilding’ which is ‘just letting existing nature take its course’. The most cited rewilding experiment is the Knepp Estate in West Sussex (1,400ha), where they take the view it is wilding, as in their book ‘Wilding’ (reviewed here in 2020). However, as Ian Newton explains this is just a tiny fraction of what is already in progress with examples such as 60,000ha in Speyside, 29,334ha at the National Trust’s Mar Estate and 23,000ha in Glen Tromie.

It is good to see that The Flows are mentioned in detail – under ‘birds displaced by forestry’, and how many of the botanically rich peat bogs were sadly lost to tax breaks, but Newton explains that RSPB removed 2,600ha of conifers and a further 2,000ha have been approved for clearance. He states that ‘nearly one-fifth of the British uplands are currently under conifer plantations’. By replacing peat bogs with forestry eventually increases species numbers and overall bird densities increase with forest age he says – but it can be painfully slow – and he admits that ‘afforestation of former open land leads to the replacement of one bird community with another’ – yes botanically also!  In his ‘Farming and Birds’ book he has a section on insect declines, which sets the scene, somewhat, for the change in avifauna populations seen today.

The book is well illustrated with colour photographs of upland habitats, management of uplands and fauna of the uplands. There are subject and species indexes and a comprehensive table on the ‘Breeding Habitats and Winter Distributions of Upland Birds’ according to the different habitats regions. The book is ideal for libraries, naturalists and ornithologists, and it is a welcome addition to the NNL. It is a comprehensive assessment of birds in the uplands,all supported by peer-reviewed evidence.  What will be the author’s sixth NNL book?