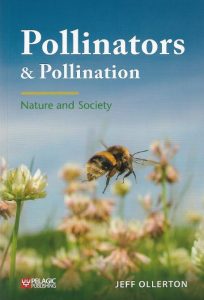 As the blurb states Prof Jeff Ollerton is ‘one of the world’s leading pollination ecologists’ who works at the University of Northampton. Most of his 30-year’s research is poured into this major work and it has plenty of graphs as an evidence base for his ideas and theories. He states that he has pitched the book ‘at a very broad audience, and is intended to be comprehensible to anyone with an interest in science and the environment.’ He has succeeded admirably in this aim, and it covers an area not explored by other bee experts whose work is discussed. This is the first time I have seen a blanket acknowledgement for all his academic contacts rather than mentioning bee experts by name. This is not just about bees and pollination – though it may seem that way as Apis mellifera is a major pollinator – it is about all pollinators, birds, reptiles, mammals and invertebrates. There are an estimated 350,000 terrestrial vertebrates and invertebrate species that move pollen, for the estimated 352,000 species of flowering plant: so flowering plants are well catered for and co-evolution is patently evident.  Invertebrates are the commonest pollinators: the estimated number of species, from the largest to the smallest as listed, are Lepidoptera (141,500 species), through Coleoptera (77,300), Hymenoptera (70,000), Diptera (55,000) and Thysanoptera (1,500 species).The book has 14 chapters ranging from ‘To be a flower’ to ‘Agricultural Perspectives’ to ‘New Bees on the Block’ – mostly about the Tree Bumblebee and The Ivy Bee, and the 17 species of bee, wasp and true-flies that have turned up in Britain since 2000. A lot of the collation has been by BWARS.  He even has a chapter on ‘The politics of pollination.’ There is a section on neonics in which Ollerton reminds us they are chemically similar to naturally occuring nicotine, which used to be used a long time ago. He debates all sides of the issue, but unfortunately just missed the latest UK authorisation of neonics prior to publication. In reviewing the literature he shows that some recent research ‘strongly implicated as a likely driver of those declines.’  It is good to see that Buglife-The Invertebrate Conservation Trust is mentioned, as well as the National Pollinator Strategy. As the author states ‘I have tried to provide a personal, state-of-the-art overview of what pollinators are, where they are to be found, how they contribute to the pollination of both wild and agricultural plants, supporting the wild ecosystems…’ etc.  There are just a few colour photographs dotted about the book, but it really offers extended essays on topics rather than pretty photos that can be found in a host of other bee books.   The References run to 32pp and there is an index.